DPhil Student Andrew Styles has published his first paper in the Journal of Advances in Modeling Earth Systemsm showing that spurious forces can dominate the vorticity budgets of ocean gyres in C-grid ocean circulation models.

Gyres are large scale circulations in the world ocean that often interact with the sea floor. It is important to develop a method to assess how the representation of the sea floor in models affects gyre circulations. By calculating how model forces generate vorticity (the tendency to rotate) in the flow, we are able to determine the forces acting with and against the gyre circulation. In his paper, this method is applied to results from a simplified double gyre model and the Weddell Gyre in a realistic global model. The paper shows that spurious forces which emerge from the layout of the model grid play an important role in the presented gyre circulations.

The work was carried out collaborative with the Met Office through a CASE award. 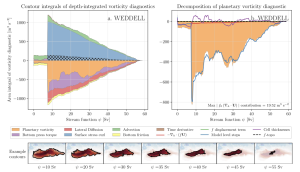