A paper led by Julian Mak has just appeared in Ocean Modelling demonstrating that eddy saturation – insensitivity of the volume transport of a circumpolar current to surface wind stress – is an emergent property of our new geometric eddy parameterisation. In effect, we modify the widely-used Gent-McWilliams eddy parameterisation by solving a parameterised eddy energy budget and rescaling the eddy transfer coefficient to match the formderived in Marshall et al. (2012). This is for the same physical reasons as described in our recent paper in Geophysical Research Letters. We are currently working towards implementing this geometric eddy parameterisation in an Ocean General Circulation Model. 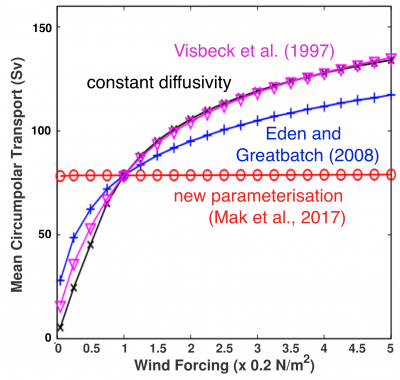