Much of our recent work has been building on a geometric framework for parameterising eddy fluxes that we first published in 2012 and 2013. A consequence of this framework is that if the eddy energy and stratification are known, then the eddy diffusivity is determined uniquely aside from a non-dimensional scaling factor that is no greater than 1.

A paper led by Scott Bachman has just appeared in Ocean Modelling in which we use a high-resolution numerical model to diagnose the eddy diffusivity in an unstable front and compare it to several theoretical predictions. Not only does the geometric eddy diffusivity fare better than the competition, but it out-performs our wildest expectations. This is a particularly exciting result as it may allow us to improve the parameterisation of unresolved eddies in the ocean models used for climate prediction. 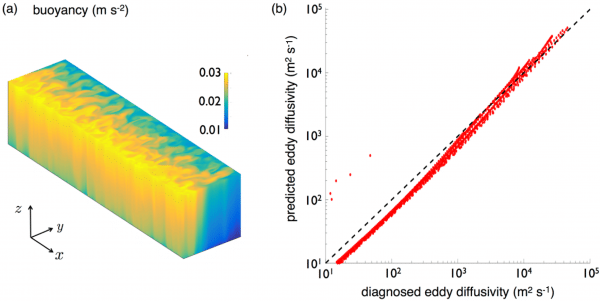