Mads Poulsen, a recent visiting graduate student from the University of Copenhagen, has published an article on “A Geometric interpretation of Southern Ocean eddy form stress“, has been published in the Journal of Physical Oceanography. Complimentary to the use of eddy ellipses to describe eddy Reynolds stresses, the paper shows that eddy form stress, which transfers zonal momentum downward in the Southern Ocean, can be fully described by a vertical ellipse whose size, shape and orientation with respect to the mean-flow shear determine the strength and direction of vertical momentum transfers.

Our review paper led by Helen Johnson, “Recent Contributions of Theory to Our Understanding of the Atlantic Meridional Overturning Circulation“, has been published in the Journal of Geophysical Research: Oceans. This is part of a special collection of review papers on “Atlantic Meridional Overturning Circulation: observational and modelling advances“.

I’m super proud that former graduate student, Geoff Stanley‘s outstanding sole-author paper on Neutral Surface Topology has been published in Ocean Modelling. This should redefine how we calculate neutral surfaces in the ocean. A huge bonus is that they are extremely fast to compute: 50s for the surface shown below, versus 12hrs for the equivalent omega surface (the previous gold standard).

A new international study finds that the Atlantic meridional overturning circulation, a deep-ocean process that plays a key role in regulating Earth’s climate, is primarily driven by cooling waters west of Europe.

In a departure from the prevailing scientific view, the study shows that most of the overturning and variability is occurring not in the Labrador Sea off Canada, as past modelling studies have suggested, but in regions between Greenland and Scotland. There,  warm, salty, shallow waters carried northward from the tropics by currents and wind, sink and convert into colder, fresher, deep waters moving southward through the Irminger and Iceland basins.

Overturning variability in this eastern section of the ocean was seven times greater than in the Labrador Sea, and it accounted for 88 percent of the total variance documented across the entire North Atlantic over the 21-month study period.

University of Oxford researchers Helen Johnson (Earth Sciences) and David Marshall (Physics) participated in the study, led by Duke University in the United States and the National Oceanography Centre in the UK.

“Changes in the rate of overturning affect the transfer of heat to high latitudes and can impact on Arctic sea ice” added Johnson.

“These findings, unexpected as they may be, can help scientists better predict what changes might occur to the meridional overturning circulation and what the climate impacts of those changes will be”, said project lead Susan Lozier (Duke University, United States).

“As scientists, it is exciting to learn that there are more pieces to the overturning puzzle than we first thought,” said coauthor Johannes Karstensen (GEOMAR Helmholtz Centre for Ocean Research, Germany).

The paper, published on 1 February in Science, is the first from the £25 million, five-year initial phase of the OSNAP (Overturning in the Subpolar North Atlantic Program) research project, in which scientists have deployed moored instruments and sub-surface floats across the North Atlantic to measure the ocean’s overturning circulation and shed light on the factors that cause it to vary.

At the start of October, I cycled over to Cambridge to spend a couple of days at the British Antarctic Survey, to be interviewed by Dan Jones for an episode of his excellent Climate Scientists Podcast and also to work with my former graduate student and post doc Dave Munday.

The podcast can be found to on a number of platforms. Dan and I had an enjoyable and wide-ranging conversation covering creativity in science (and jazz), my group’s efforts to represent the effect of small-scale eddies in ocean climate models through the GEOMETRIC project, the OSNAP international programme to observe and interpret the overturning circulation in the subpolar North Atlantic, my pathway into science, and the importance of finding what it is that you love doing in your work.

If you do enjoy listening to this and/or other episodes, please do leave Dan with some positive feedback!

A couple of links mentioned in the podcast:

Julian Mak‘s paper on the Implementation of a Geometrically Informed and Energetically Constrained Mesoscale Eddy Parameterization in an Ocean Circulation Model has been published in the Journal of Physical Oceanography and is freely available.

This is the first paper in which we implement and test GEOMETRIC in an ocean general circulation model, albeit in idealised basin geometries. We find that integrations at coarse resolution, in which eddies are parameterised by GEOMETRIC, display broad agreement in the sensitivity to surface wind stress of the circumpolar transport, meridional overturning, and depth-integrated eddy energy pattern as analogous reference calculations at eddy-permitting resolutions. Differences can be ascribed to the overly simple parameterised eddy energy budget employed in this calculations, which is likely to be a key area of focus for the eddy parameterisation problem over the next decade.

We have a fully-funded DPhil (PhD) studentship available to work on the stability of stratified equatorial ocean jets, a @NERCscience Industrial CASE project joint between @OxUniMaths , @OxfordAOPP and @metoffice. You can apply to be based either in Mathematics or in Physics, depending on your preference. Applications to both departments will be considered equally.

The instability of zonal flows to small disturbances underpins our understanding of the scales of motion and their predictability in planetary atmospheres and oceans. Numerous papers have explored aspects of this problem since pioneering work in the late 1940s. The quasi-geostrophic formulation is only valid for small Rossby numbers and large Richardson numbers and requires the stratification of the basic state to be independent of latitude. Formulations with more general validity have until recently been restricted to laterally uniform flows neglecting the Earth’s curvature.

Recently, Bell (2018) has described a simple but novel method for studying stability of any zonal flow that is in thermal wind balance: the linearised primitive equations are reduced to a partial differential equation involving only a single variable, the pressure perturbation; the equation is linear in the pressure perturbation, but nonlinear in the complex phase speed which sets the growth rate of the instability. The method can be used to study the stability of jets on a sphere in which the stratification of the basic state varies with height and latitude, the motions can be non-hydrostatic and the fluid can be compressible. Instabilities associated with different types of critical layers and symmetric and Kelvin Helmholz instabilities can be studied. Integral constraints on the instabilities can also be derived.

We will investigate the instability of stratified zonal jets near the equator where the Rossby number is large and the Earth’s curvature of fundamental importance. These flows exhibit a number of instabilities that lead, for example, to the formation of tropical instability waves, the heat transport by which is of fundamental importance in setting ocean structure and heat uptake with widespread impact on tropical climate. Understanding the stability properties of these equatorial flows is therefore crucial for understanding the response of tropical climate to anthropogenic forcing.

The dependence of growth rates on the profile of the mean state will be investigated in a hierarchy of progressively more complex zonal flows. The heat and momentum transports by the unstable waves will be calculated and compared with those of tropical instability waves in NEMO ocean model simulations. Three classes of instabilities within the near-surface ocean mixed layer will be studied: symmetric, baroclinic and Langmuir instabilities. The student will diagnose the instabilities in ocean circulation models, explore numerical solutions for a hierarchy of zonal flows, consider theoretical aspects such as integral constraints on the instabilities and neutral modes which mark stability transitions, and calculate the non-linear or weakly nonlinear development of the instabilities. Preliminary investigations of numerical solutions indicate that the growth rates of some instabilities are overestimated unless very fine vertical grid spacing is used: the student will also investigate the vertical resolution that is required for ocean circulation models to avoid misrepresenting the different classes of instabilities.

This project will suit a student with a strong mathematical/physical science background.

Helen Pillar‘s paper on Impacts of Atmospheric Reanalysis Uncertainty on Atlantic Overturning Estimates at 25°N has been published in the Journal of Climate and is freely available.

MIT News are running a story on former DPhil student, Ed Doddridge‘s paper, published in the Journal of Geophysical Research: Oceans, on The role of ocean eddies in maintaining biological activity in subtropical gyres. Wind-driven downwelling exports nutrients away from the sunlit zone, preventing phytoplankton from thriving. In this paper, we show that eddies, by opposing this wind-driven downwelling, can change how much fluid is exchanged between the sunlit layer and the homogenous layer below, thereby allowing the nutrient concentration at the surface to increase. See MIT News for the full story and JGR Oceans for the published paper. 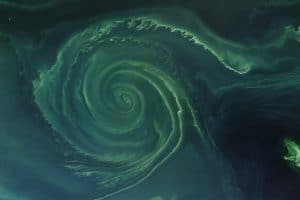 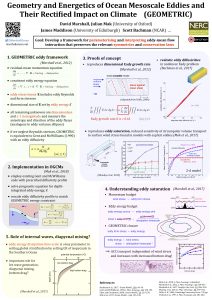 I  greatly enjoyed attending the Gordon Research Conference on Ocean Mixing and  presented a poster on our GEOMETRIC framework for parameterising ocean eddy-mean flow interaction. You can read about our latest results in this paper submitted to the Journal of Physical Oceanography and on the GEOMETRIC project page.